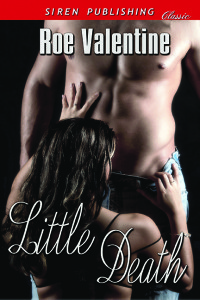 Blurb:
A grandiose ego pushes Mona MonDragon to pursue high school nerd turned gorgeous ballet dancer Ivan Boss. Unfortunately, her perceived sure-thing week of no-strings-attached sex isn’t so sure. Her ego takes a major hit when he not only rejects her but pretends he doesn’t know her. When she jumps through hoops to have him, she begins to question if what’s driving her to take such chances is something residual from childhood. Whether it is or not, all she knows is his wish is her desire.

Revenge drives Ivan Boss, and when the object of his hate comes back into his life after 10 years he battles the part of him that loves Mona with the part that wants her to pay for torturing him when he needed her most. The internal struggle heightens when he starts to see her as human, and he begins to question his ability to follow through with his ultimate revenge.

Little Death is a standalone novella with explicit language and sex with some light bondage. It has a Happily Ever After (HEA) ending.

You can find Little Death on Goodreads

She was light as a feather as he lifted her buttocks. Her legs tightened around his waist, squeezing tighter and tighter around as he released one hand to retrieve his keys from the hoodie pocket. They barely made it through the small rusted gate of his bungalow house in Neartown before they clasped together like desperate magnets.

“Just give me a sec,” he grumbled, though not taking his mouth away. His teeth clashed against hers, but she kept kissing him.

Finally, he’d gotten the door opened, and didn’t take much time to shut the door and whisk her through the small living room, eighty-year-old hardwood creaking beneath his feet. His breathing echoed between his ears, his cock hardening with each exhale. Mona gyrated against him, he moaned out. “I’m gonna fuck your pussy raw. Do you understand me, Ramona?” He meant it in the most non-brutish way possible.

She yelped, catching his gaze, her mouthing parting from desire. “You already did that.” Her voice was husky, deeper than he’d heard it before.

He chuckled, pulling his mouth away. “That was nothing. You may not be able to walk tomorrow.” Her eyes widened. “I’m just warning you.”

“Then you’ll have to tell Tom why I didn’t show up for training.”

“I’ll be more than happy to tell Tom of all the ways I fucked his student so hard she couldn’t get out of bed.”

She laughed. “I’m sure that will go over well.”

He grunted. Tom. Tom probably wanted to fuck Mona himself. Ivan didn’t like that thought. Crossing over into his bedroom, he stopped at the doorjamb. “You ready for me?”

“I’ll be the one giving orders here, lady. And you’ll answer my question or I’ll let you go.” He still had to let her know who was in control, especially when he thought it wasn’t him.

He knew what it was like to fall. The longer he held her, the more he fell. How could he remain in control, when she could so easily take it from him? “Then I’d answer if I was you.”

She bit on her bottom lip, swollen from kissing him. His eyes lingered there until she answered with the slightest smile emerging. “I’ve never been more ready for anything in my whole life.”

His heart stilled merely by the look in her eyes. Every puff of air emptied from his lungs with her eyes. She wanted him—needed him even. Her pupils screamed it. Her body screamed it as she tightened around him, and he could feel her pounding heart through the apex of her thighs.

“I’ve never wanted anything more.” The words just came out.

But instead of pulling away from his revelation, she grabbed the back of his head and crashed her mouth to his, tongue leading the way. He took that tongue with his teeth, taking her in as deep as her opened mouth would allow. Hungry for her, he shifted in the room just to slam her back against the wall. A picture frame hanging haphazardly for years fell to the hardwood, breaking in pieces. Like him. She was breaking him of the hurt, of the rejection, from many years.

Finding the bottom of her scrunched up skirt, he pushed over the panties—he’d tear them in half before he was done with her. Her moisture spilled over to the crease of her thighs. Moaning, he strummed her pussy. She was wet, and he didn’t want anything more than to slide his bare cock inside her. Fuck, I can’t put it in without a condom again. But he did. Somehow, he’d managed to release himself from sweatpants and jammed himself inside her so deep their hip bones touched.

“Ivan!” she screamed. How she could take him in like that was impressive. He knew he was a lot to take in one shot. And when he plunged inside her again, she said, “I think you’re touching my spleen.” Her eyes rolled back in time to miss the smile he gifted her.

“Can you take it, baby?” Baby? He stilled for the briefest moment but didn’t stop.

Immediately, her eyes opened and grabbed his. Her mouth parted as he continued to slide inside of her, pushing through her tightening womb. She moaned, and he thought he’d come right then and there. The way she looked at him as he was inside her, challenged his ability to last. Kept challenging it until she spoke with a breathy whisper. “I can take you, baby. I can take you all the way.”

He wanted to go wherever that was.

Please tell us a bit about your latest release.

Little Death is about a two estranged childhood friends who have a chance encounter. The heroine and hero’s attraction is palpable. She asks for a week of passion, but he really wants revenge for being humiliated all those years ago. Will they survive their first encounter?

Are you attending any conventions in 2014? If so, what are the top three reasons as to why you like/choose them?

Yes! RWA National Conference. RWA is my favorite organization because I can take craft workshops, I can network with other professionals in the publishing industry, and I feel so inspired after I attend the conference.

What is your favorite romance genre and what author makes you absolutely swoon?

What is your dream vacation spot?

I would love to visit Ireland.

What do you think has been the most important moment or event of your life so far? And why do you feel that way?

I think I’m lucky just to wake up every morning and experience all that life has to offer. I think every day is important.

Manscape or Not – rugged manscapping if that makes sense

Lights On or Lights Off – um off

Peanuts or Chocolate – Don’t those two belong together?

The Voice or American Idol – Neither

Heels or Flats – I want to say heels, but my sensible self is saying flats

I think self-publishing can be a wonderful thing. In fact, I have many friends who self-publish and are very successful. But it also takes a lot work—as does being traditionally published. I think if you can put in the time and effort to get your book together (editing, cover, promo, etc.) then go for it! The beauty of being an author now is there are so many options. I’m sure eventually I’ll indie pub. For me, it’s whatever works for the author.

I think self-publishing can be a wonderful thing. In fact, I have many friends who self-publish and are very successful. But it also takes a lot work—as does being traditionally published. I think if you can put in the time and effort to get your book together (editing, cover, promo, etc.) then go for it! The beauty of being an author now is there are so many options. I’m sure eventually I’ll indie pub. For me, it’s whatever works for the author.

Roe Valentine was born into the right family. Not only does the name Valentine suit her, but her grandmother, unknowingly, introduced the young Ms. Valentine to her first romance novel. She hasn’t read anything else since. She calls herself a romantic at heart and believes that love conquerors all.

The San Antonio native, who now lives in Houston, attempted to write her first contemporary romance novel when she was nineteen years old. That attempt didn’t take, but her story has a happy ending. She kept pursuing the dream until she landed her first publishing contract in 2013.

When not busy writing or reading love stories, Roe can often be found in a yoga class or chatting with friends at her favorite coffee shop. Enjoying margaritas with some girl-talk isn’t unusual for her either. For a night in, she watches reruns of her favorite TV shows and, of course, romantic comedies on her Roku, usually with a glass of wine.

There is a tour wide giveaway for the blog tour of Little Death. You can win a 50$ amazon gift card!

Enter the rafflecopter below for a chance to win:
a Rafflecopter giveaway

One Response to Interview & Giveaway! LITTLE DEATH by Roe Valentine!